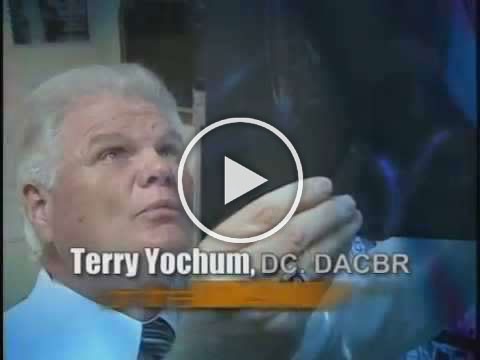 DR. YOCHUM: You know, many of you have probably heard me lecture before, the chiropractors in the audiences where I’ve lectured all over the world. Most audiences that I lecture to actually have a copy of my book which is pleasing, and I may have actually signed your book. A lot of you have looked to me in the x-ray and imaging area to guide the profession in the areas of technology and imaging technology.

I’ve recently been exposed to an outstanding case where axial decompression with the DRX9000® has dramatically reduced a focal disc herniation at the L5-S1 level producing compression of the S1 nerve root, produced focal S1 radiculopathy. That patient had had problems for about two months and had not responded to any form or our traditional chiropractic-type treatment. He’d also had physiotherapy and acupuncture. He took it upon himself to see a colleague and have axial decompression and DRX9000® done.

The pre and post MRI scans were remarkable and the changes were, to me, almost mind-boggling. The disc herniation was resorbed. This patient was back to playing Ping-Pong, back to his physical activities, the normal activities of life without pain. The leg pain is gone and he was imaged in September of 2005, had 17 treatments on the DRX9000® and then was rescanned in May of ’06 for that timeframe. He was asymptomatic after two months and has remained asymptomatic up till when he was scanned in May. The scans were done the same axial and sagittal scans, the same T1 and T2-weighted imaging sequences were performed so that we were able to actually reproduce the exact same clinical scenario for the imaging of that patient; it was a miraculous result.

That being the case, many of you who maybe have struggled with treating some patients with disc herniations there is a new modality available to you and it’s the DRX9000®. I’m impressed with what axial decompression can do, very impressed with DRX9000® and would think that this would be something that you should consider looking into. It’s credible. I’ve had lots of good response from chiropractors who I’m reading images for around the United States and also in the Denver community. Doctors who I’ve spoken to many of their patients who’ve been in my office to be x-rayed I’ve wound up reading their MRI scans who have gotten their life back as a result of this and have been able to avoid surgery.

REN: Hello everyone and welcome to this introduction to the DRX9000® Spinal Decompression System. If you’re watching this video right now, chances are you’re one of the millions of people who suffer from severe back or neck problems and chances are you’ve tried many different medications and therapies that simply didn’t work, but now if you qualify for treatment on the DRX9000® all that can change.

If at all possible, we’d like to have patients not have surgical intervention. You doctors know that, you know the complications of those surgical interventions. We want to avoid them if at all possible and you know the success rate on surgery isn’t very good, 5-year success rate, 50% recurrence, scar tissue that can occur following that. If you’re a smoker out there, you doctors want to tell your patients you’ll get three times the amount of scar tissue with every surgical intervention if you’re a smoker. We have an awful lot of patients who are smoking, so they’re even further risk to have back surgery or spinal injections that may not be successful. This is something you all want to keep in mind and educate your patients concerning the potential and investigate the possibility, attend some seminars and do some reading about axial decompression, specifically the DRX9000®.