Approximately 25–60% of patients who experience low-back pain (LBP) will report recurrence of pain, many within as little as one year.1 LBP is the most common cause of work disability in the US.2 Many patients on disability for in excess of six months will not return to work, and that number decreases to near zero after two years.3 LBP is also the most expensive reason for work disability in the US.2 It has been estimated that 2% of the work force in the US will be compensated for back injuries yearly.3

Structural abnormalities such as disc degeneration or disc herniation as well as resultant biochemical effects such as inflammation can be the cause of disc-related pain.1 According to Jarvik et al., “disc herniation with nerve root compression or irritation is the most common cause of neurologic abnormalities.”2 Discogenic and radicular pain syndromes are common and continue to pose challenges to physicians and patients.1

The DRX9000™ (Axiom Worldwide, Tampa, FL) has been developed to provide relief of LBP and symptoms associated with herniated discs, bulging or protruding intervertebral discs, degenerative disc disease, posterior facet syndrome, and sciatica. The patient lies supine with a knee rest to eliminate pelvic rotation. A chest and shoulder support system stabilizes the upper body while a motor pulley delivers mechanized segmental distraction through the application of a pelvic harness. The treatment angle settings can be adjusted based on the location of disc disease/injury. The goal of treatment is to lessen pain by creating a decompressive force that reduces herniation, increases intradiscal space, and decreases intradiscal pressure during treatment. The result is non-surgical spinal decompression. 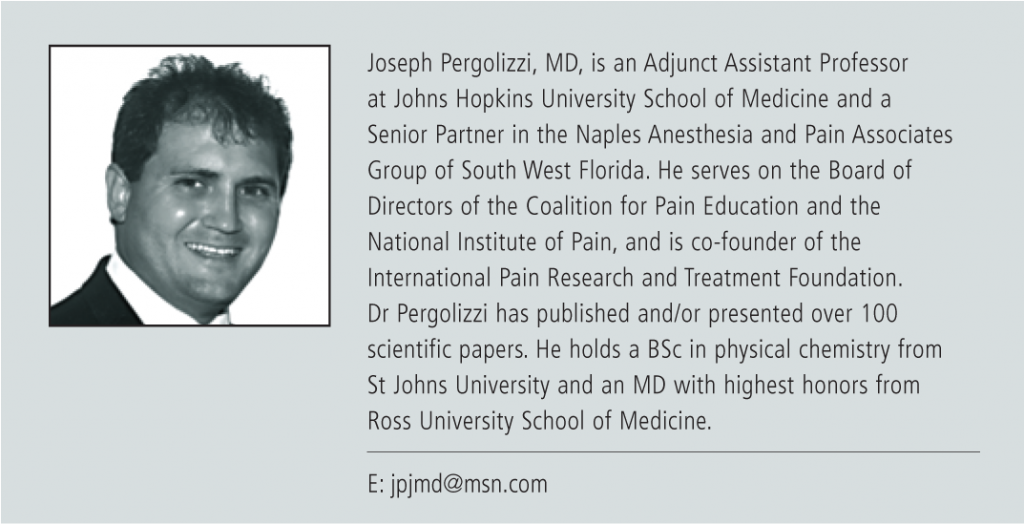 Imaging-based data are currently emerging demonstrating the positive morphological effect of treatment with the DRX9000® on the intervertebral disc.6,7 This case report examines the use of the DRX9000® for the management of LBP related to lumbar disc herniation.

A 31-year-old man presented at an outpatient facility complaining of LBP of approximately one month’s duration. The patient also reported radiating pain into the left buttock and leg. The pain was rated at 9 or 10 on a 0–10 scale, and was described as sharp, shooting, burning and tingling at the time of the

A retrospective study of 94 patients treated with the DRX9000® revealed that chronic low-back pain may improve with spinal decompression.

initial evaluation. The patient was 70 inches tall and weighed 140 pounds. The pain reportedly increased while standing or sitting and was relieved only when lying down; in addition, the pain disrupted his sleep. Magnetic resonance imaging (MRI) of the lumbar spine performed on July 6, 2006 revealed a left paracentral disc extrusion at L5/S1 that was compressing and displacing the left S1 nerve root, as well as degenerative disc disease at L4/5 and L5/S1. A review of the available medical records indicated a previous episode of LBP approximately seven months earlier

The patient underwent 27 treatments with the DRX9000® over a seven-week period. Treatment began at a maximum decompressive force of 80 pounds; the decompressive force was raised in increments of five pounds at the discretion of the physician, ending with a final treatment at 100 pounds. The angle of treatment force ranged from 8 to 15º. Adjunctive treatment included electrical stimulation, therapeutic exercise, and moist heat. The patient reported a decrease in pain from a score of 8.5 on a 0–10 scale occurring 85% of the time at initial treatment to a score of 3 occurring 30% of the time at the end of the treatment protocol. MRI of the lumbar spine performed on November 3, 2006 demonstrated a dramatic decrease in the size of the disc lesion as well as the compression placed on the left S1 nerve root. A number of additional outcome assessments were also performed with this patient pre- and post-treatment protocol. Range of motion testing performed with a computerized dual inclinometer revealed increases in lumbar flexion (39%), extension (75%), left lateral flexion (57%), and right lateral flexion (53%) with the completion of treatment. A computerized comparative muscle strength test (CCMT) was also performed indicating the following improvements with treatment: left hip flexors (50%), right hip flexors (71%), left hip abductors (106%), right hip abductors (-3%), left knee flexors (43%), right knee flexors (24%), left knee extensors (105%), and right knee extensors (80%). It should be noted that although a decrease of 3% was observed in the right hip abductors, the difference between right and left was reduced from 46 to 13%. Pain disability questionnaire (PDQ) score decreased from 147/150 to 59/150. Quadruple visual analog scale (QVAS) pain score decreased from 76.67/100 to 33.33/100. Back Bournemouth questionnaire score decreased from 23/70 to 13/70.

A recent review of non-surgical spinal decompression efficacy trials established that available data in the peer-reviewed literature are inconclusive in determining whether spinal decompression is superior to other non-surgical treatments in treating LBP.8 Since that review, two new studies have demonstrated the safety and efficacy of the DRX9000®, along with two case reports suggesting the positive physical effects of treatment on the intervertebral disc.4–7

A retrospective study evaluated 94 patients treated with the DRX9000® between September 2005 and March 2006.4 Diagnoses consisted of disc herniations (73% of patients), degenerative disc disease (68%), and a combination of both (27%). Median duration of LBP was 260 weeks. The patients presented with an average pain score (NRS) of 6.05, which decreased to 0.89 at the end of treatment. Oswestry Disability Index score decreased from 21.9 at presentation to 6.5 at completion. The patients also reported decreased analgesic use and rated the DRX9000® 8.55/10 on a satisfaction survey. This chart audit suggests that chronic LBP and functionality improve with treatment on the DRX9000®.

A prospective, multicenter, non-randomized phase II pilot study followed 18 patients treated between January 2007 and April 2007.5 The study participants underwent a course of 20 DRX9000® treatments over a six-week period. Mean duration of LBP was 526 weeks, with numerous failed therapies prior to the DRX9000®. The average pain score at presentation was 6.4, and reduced to 3.1 after only two weeks of treatment. This continued to decrease to 0.8 at the end of treatment. Oswestry scores decreased from 23.7 to 5.5. The vast majority of patients (88.9%) stated that they would recommend the treatment to others. No serious adverse events were reported.

This case report is the third in a series that appears to demonstrate the positive physical effects that treatment with the DRX9000® has on the intervertebral disc. The first case followed a 33-year-old male who presented to an outpatient facility with complaints of persistent LBP of six years’ duration.6 He underwent a course of 20 DRX9000® treatments over a six-week period. The patient presented with a pain score of 6, which decreased to 0 at the end of treatment. Follow-up MRI post-treatment revealed increased intradiscal signal on T2 images at L2/3, L3/4, L4/5, and L5/S1, reflecting an improvement in disc morphology. The second case report followed a 69-year-old man who presented with chronic LBP radiating into both lower extremities.7 This patient underwent a course of 22 DRX9000® treatments over a seven-week period. He reported a pain score of 10 at presentation, which decreased to 1 at the end of the protocol. Follow-up MRI post-treatment demonstrated increased disc height and decreased herniation size at multiple lumbar levels. This imaging-based evidence may be useful in explaining the clinical improvements often observed with treatment.

Clinical and imaging data continue to emerge providing further validation of the safe and effective treatment of disc-related LBP utilizing the DRX9000®. The patient in this case report experienced a decrease in pain and increased functionality, and was able to return to work after treatment. Additional prospective trials are needed to further examine the clinical and morphological effects of treatment with the DRX9000®.