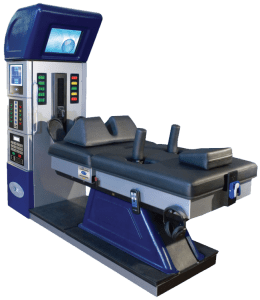 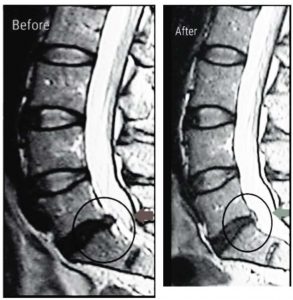 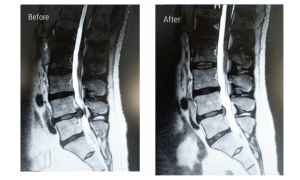 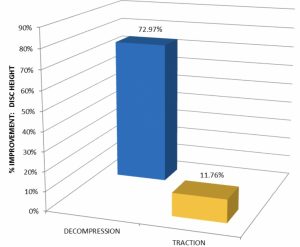 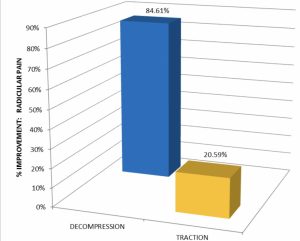 The purpose of this study was to evaluate the efficacy of motorized non-surgical spinal decompression by the DRX9000®  device in the reduction of LBP and radicular pain caused by lumbar disc herniation or protrusion and whether it correlated with MRI changes in disc height or not.

This study was carried out on 73 patients with chronic LBP attributed to disc protrusion selected from outpatients of rheumatology and rehabilitation clinics at Abdul Latif Jameel Hospital for Medical Rehabilitation, Jeddah, Saudi Arabia; these patients were divided into two groups. The first group comprised 39 patients who underwent a 6-week treatment protocol of motorized non-surgical spinal decompression via the DRX9000® , and the other group comprising 34 patients underwent a 6-week physiotherapy with deep heat modalities and ordinary traction; pain assessment using a visual analog scale with MRI was carried out before and after treatment. Paired t-test or linear regression was used, as appropriate, with P less than 0.05 considered to be statistically significant

The main outcomes were a significant improvement in LBP in both groups using visual analog scale, but radicular pain and disc height using MRI were significantly improved in group 1 compared with group 2.

The study concluded that non-surgical spinal decompression was associated with a reduction in back pain and radicular pain and with an increase in disc height and can be used as an alternative modality for discogenic LBP.

More than 80% of the population will suffer from low back pain (LBP) at some point in their lives [1]. LBP is the main factor causing limiting activity in patients less than 45 years old, the second most frequent cause for doctor’s visits, and the third most common reason for surgical procedures [2]. LBP is of significant socioeconomic relevance, as it affects patients’ quality of life, may lead to a loss of productivity temporarily and enormous medical and indirect costs, or even permanent disability [3].

The traditional management of LBP was nonsurgical treatment with analgesia supplemented by physiotherapy. There are many modalities of physiotherapy such as massage, spinal manipulation, exercises, acupuncture, back school, and cognitive behavioral therapy [4]. They also report some of the problems associated with simple traction, such as fatigue, triggering of muscle spasm, the patient’s inability to tolerate the force or position, and the exacerbation of pain [5].

Thus, the other treatment modality is motorized decompression, a technique designed to decrease

pressure on the discs, vertically expand the intervertebral space, and restore disc height [6]. Spinal decompression systems such as the DRX9000®  have been launched into clinical practice in the last few years for the treatment of LBP. These systems provide a noninvasive intervention for the treatment of LBP of discogenic origin.

The goal of this study was to evaluate the efficacy of motorized non-surgical spinal decompression by the DRX9000®  device in the reduction of LBP and radicular pain caused by lumbar disc herniation or protrusion and whether it correlated with MRI changes in disc height or not.

This study was carried out on 73 patients; their ages ranged from 21 to 45 years; they had chronic LBP with radicular pain caused by disc protrusion or herniation, as diagnosed by MRI of the lumbosacral spine, and the duration of the disease was more than 12 weeks [8]. They were selected from outpatients attending the rehabilitation clinic in Abdul Latif Jameel Hospital for Medical Rehabilitation, Jeddah, Saudi Arabia, during the period spanning from January 2016 to September 2017; consent was taken from every patient for the treatment and to be included in this study. Patients with other causes of LBP, the presence of osteoporosis, vertebral fracture, displacement, weakness in the lower limbs, impaired sensation in both lower limbs or spondylolisthesis and pregnant women were excluded from the study. The patients were divided into two groups.

Intervertebral disc height
Intervertebral disc height of the lumbar spine was measured on midsagittal MRI from the middle of the superior border of the disc to the middle of the inferior border of the discwith theinclusion of both end plates. In our study,we detect the difference of disc height between two MRIs to avoid personal variation in disc height. Paired t-test or linear regression was used, as appropriate, with P less than 0.05 considered to be statistically significant.

The protocol of the DRX9000®  includes 20 sessions of spinal decompression over a 6-week period with 30- min active treatment sessions. Each patient was administered treatment five times per week for the first 2 weeks and three times per week for a further 2 weeks, and it was then tapered down to two sessions per week for the last 2 weeks. At the start of the session, the patient is fitted into the supine position. To start active treatment, the machine pulls the patient gently on the lower harness while the upper harness remains stationary, thus distracting the patient’s spine. A safety button can be pushed at any time by the patient to release all tension immediately. The initial decompression force was adjusted to patient tolerance, starting at 4.54 kg (10 lbs) less than half their body weight. If a patient described the decompression pull as ‘strong or painful,‘ this distraction force was decreased by 10–25%. In subsequent treatment sessions, the distraction force was increased as tolerated to final levels of 4.54–9.07 kg (10–20 lbs) more than half their body weight. After the end of each therapy session, a cold pack with electrical muscle stimulation was applied to help paravertebral muscles consolidate after treatment.

Discogenic pain is a major problem in the lumbar area, and it may be caused by progressive annular breakdown and tearing, which cause pain by stimulating pain fibers in the outer one-third of the annulus and by compression over the nerves’ roots. Spinal decompression systems using the DRX9000®  have become a noninvasive intervention for the treatment of LBP caused by disc protrusion or herniation by expanding the intervertebral space and reducing the disc protrusion. Our study showed that there was an improvement in back pain and lower extremities’ radicular pain with the decompression system; the improvement was more significant in lower extremities’ pain than back pain. 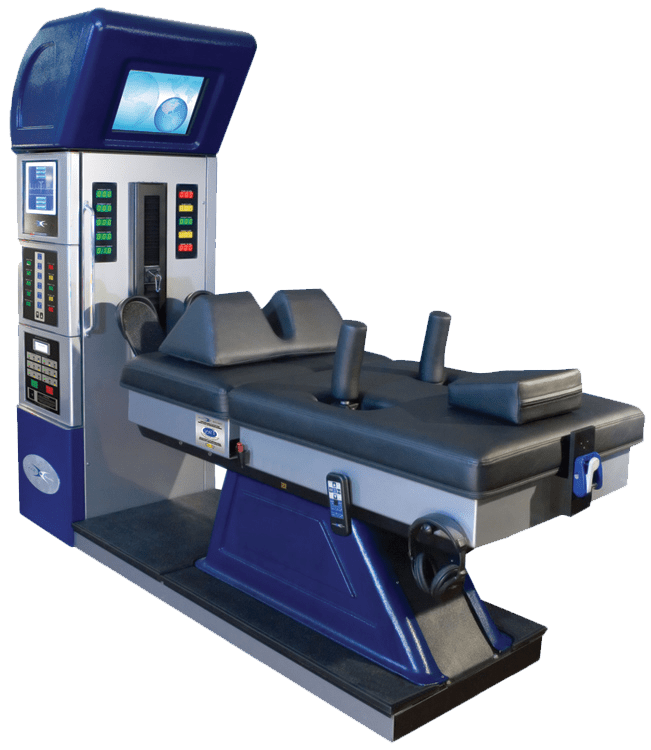 There was a significant improvement in the disc heights of the majority of patients by the decompression system. Comparing with the control group, we found highly significant improvement in patients treated with the decompression system with regard to radicular pain and disc height compared with other physiotherapy modalities. Our study was in agreement with Richmond et al. [7] who stated that Non-surgical Spinal Decompression. 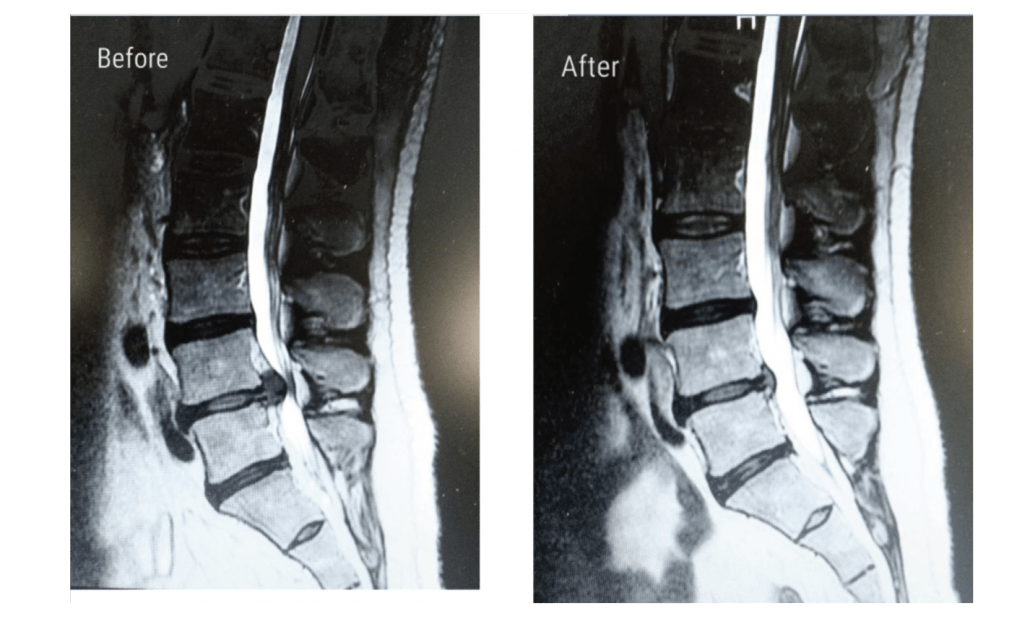 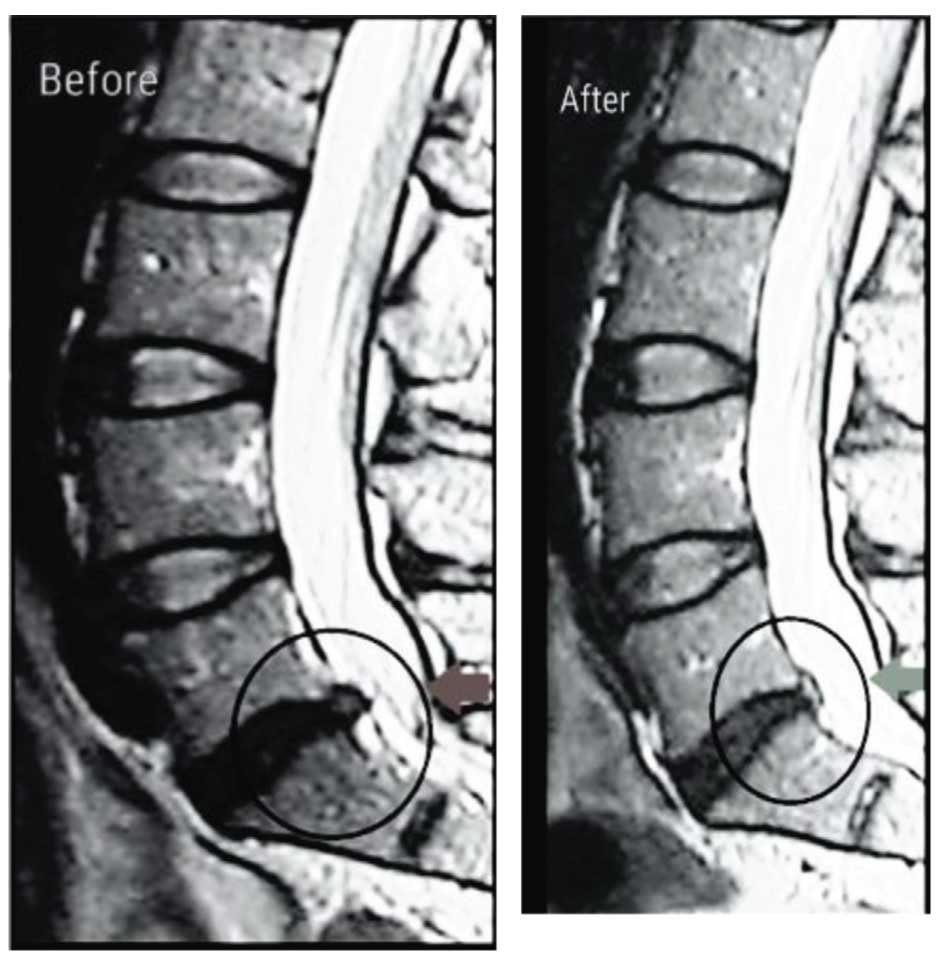 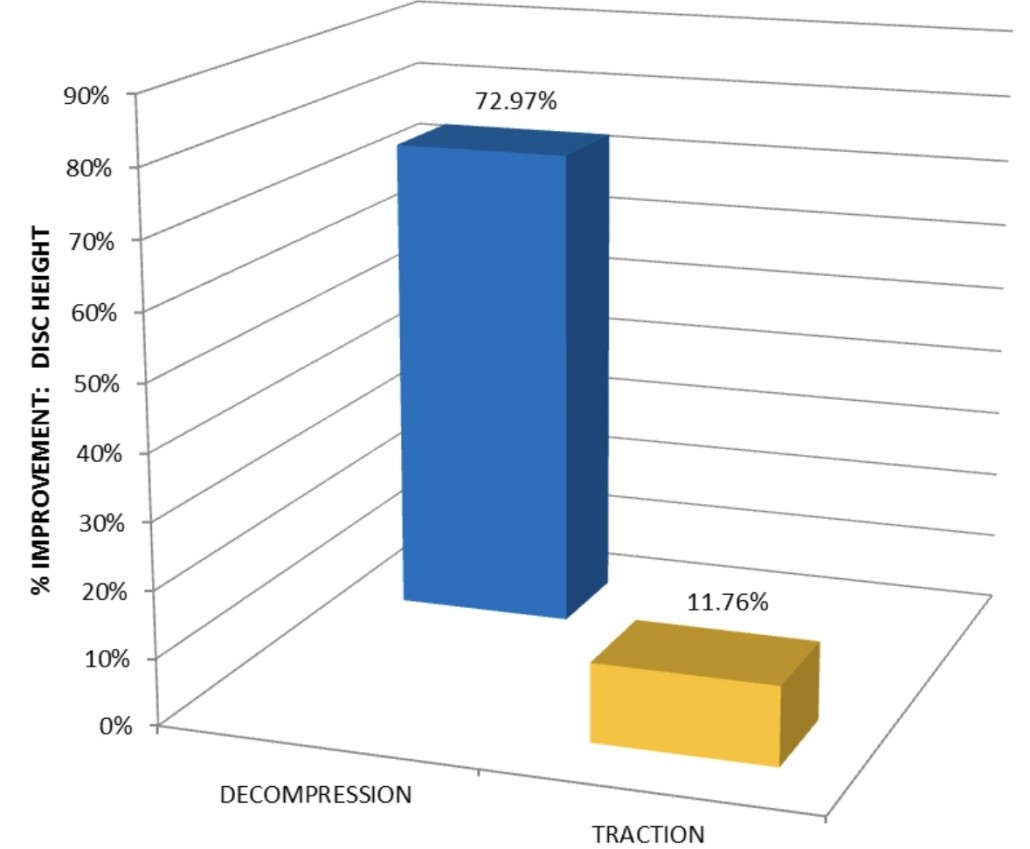 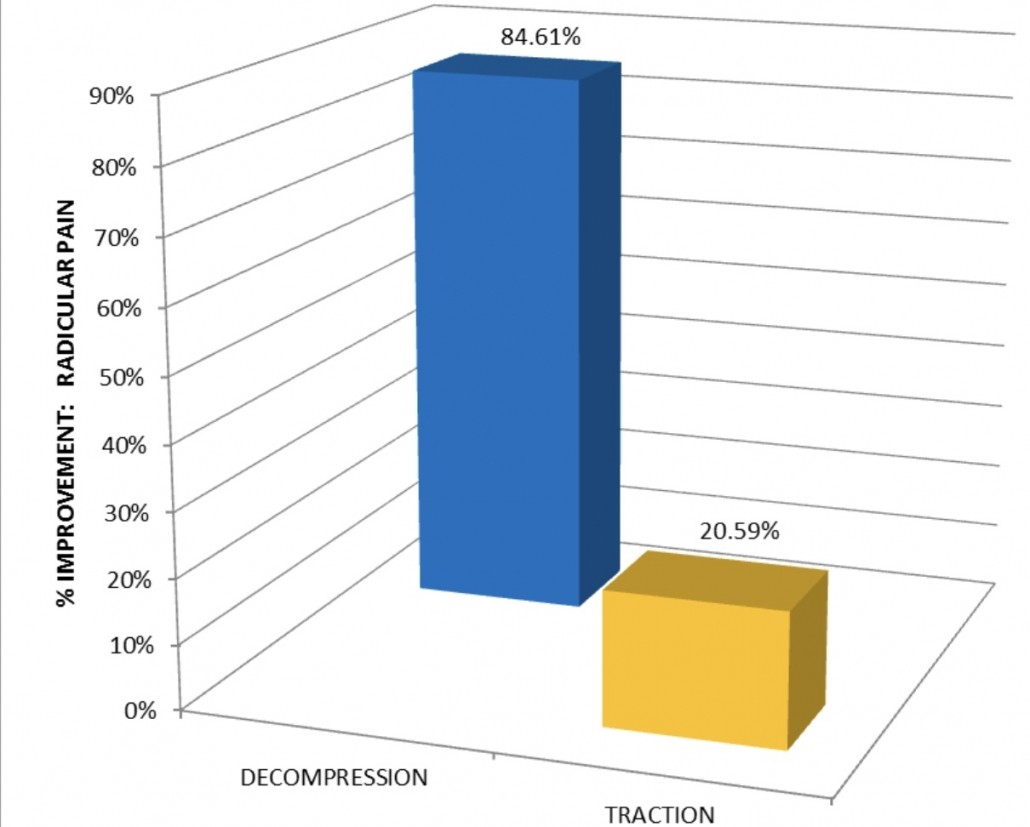 Table 1 Comparison between the two groups

Table 2 Percentage of improvement between the two groups

System by using the DRX9000®  resulted in relief of LBP and symptoms associated with herniated discs, bulging or protruding intervertebral discs, degenerative disc disease, posterior facet syndrome and sciatica by using a sensitive computerized feedback mechanism. In another study, Apfel et al. [10] found that spinal decompression by DRX9000®  for treating chronic discogenic LBP caused relief of pain and restoration of disc height, and there was a correlation between pain reduction and degree of restoration of disc height, which agreed with our study; however, the difference between this study

Table 3 Percentage of improvement between the two groups

Table 4 Percentage of improvement between the two groups

and our study was that they assessed disc height by using CT scan but we used MRI. Thomas et al. [11] agreed with our study, as they stated that non-surgical spinal decompression (DRX9000®) had effective treatment of discogenic back pain by decompressive force, as pain was reduced in 86% of patients who were candidates for surgery, and mechanical function was restored in 92%, but 2% of patients presented with pain after 90 days and 3% of patients suffered a relapse.