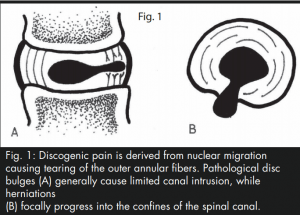 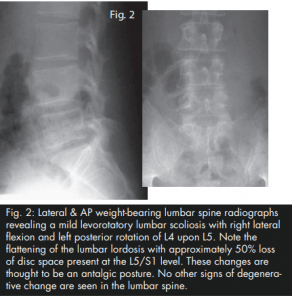 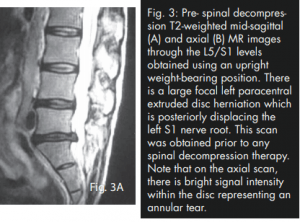 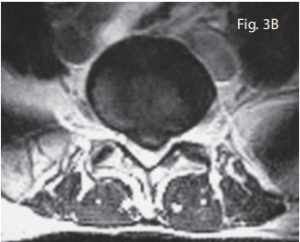 Clinical Features: A 50-year-old male presented with a chief complaint of severe lower back pain and left sided sciatica persisting for two months. Most orthopedic testing procedures could not be performed due to the severity of pain at the time of presentation. Standard radiographs of the lumbar spine revealed only some moderate disc space narrowing at L5/S1. However, the patient did present a magnetic resonance image (MRI) report with images performed one week prior. The lumbar MR images obtained were scanned in a neutral seated (weight-bearing) position using an upright unit. The imaging report was written by a chiropractic radiologist and revealed an L5/S1 left paracentral disc herniation (extrusion) causing posterolateral displacement of the left S1 nerve root.

The intervertebral disc tends to degenerate in everyone as part of the aging process. Although this does not inevitably cause back pain it is probably the most common site of spine pain; accounting for up to 85% of cases.1 Relentless research has been applied to determine the exact mechanism for disc pain, and although the exact pathophysiology of this has not yet been determined, several hypotheses exist. The most likely mechanism begins with aberrant mechanical forces causing an inflammatory response and thus stimulating the nocioceptive receptors within the disc.1

The disc itself is made up of two major components, an outer annulus fibrosus and an inner nucleus pulposus. The annulus fibrosus is composed of a fibrocartilaginous series of concentric rings with collagen arranged at a 65 degree angle from the vertical plane.2 Each ring abuts another, with adjacent fiber orientation in the opposite direction, and thus, it has been found to be the primary load-bearing structure of the disc. The nucleus pulposus is the gelatinous center of the disc. It is avascular and nurtured only from a process known as imbibition. Activity during the day and rest at night is crucial for the pumping of nutrient rich fluid through the vertebral endplate and into the disc.2

While the outer one third of the annulus fibrosis is proprioceptively and nocioceptively innervated, the inner twothirds of the disc is not.2 Pure discogenic pain is theoretically not possible until the nucleus pulposis disrupts the outer annular fibers. This phenomenon occurs with pathological bulging or herniation of the disc (Fig. 1). Three factors are involved in the evolution of discogenic pain. These include structural disruption of the disc, inflammatory infiltration to the site of disruption and nocioceptive sensitization at the level of the disc’s innervation. Of these three factors, the biomechanical factor is perhaps most relevant in this study, as without this factor, the chemical and nocioceptive factors would not have existed.3

Fig. 1: Discogenic pain is derived from nuclear migration causing tearing of the outer annular fibers. Pathological disc bulges (A) generally cause limited canal intrusion, while herniations (B) focally progress into the confines of the spinal canal. 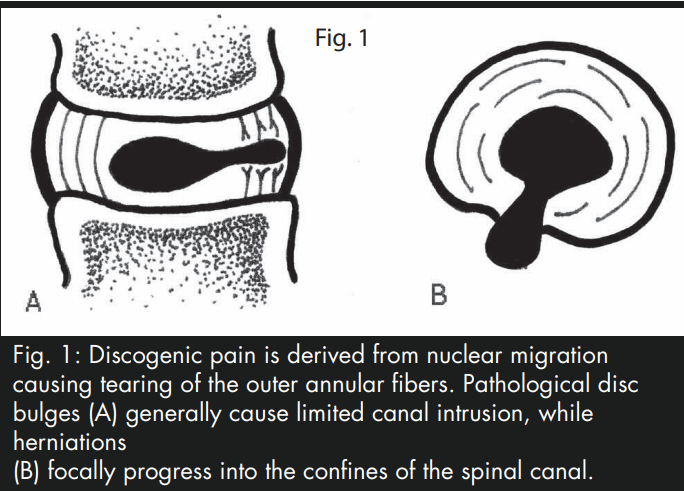 This report discusses a case of a 50-year-old male complaining of a two month history of severe lower back pain with progression to left sided sciatica. The patient had sought previous consult with medical physicians, chiropractors and an acupuncturist. The various attempts of muscle relaxants, pharmaceuticals, specific chiropractic manipulative techniques, and acupuncture provided did not offer significant results.

During this trial of divergent care, plain film radiographs and MR images of the lumbar spine were obtained. The radiographs were performed in the weight-bearing position and included anteroposterior and lateral projections. They revealed a slight levorotatory lumbar scoliosis and significant flattening of the lumbar lordosis. These films suggest an acute clinical presentation. The disc space at L5/S1 demonstrated approximately 50% loss of height; no other signs of degenerative change were seen (i.e. sclerosis, spondylophytosis) (Fig. 2). The MRI was performed on an upright unit and the images were taken in the neutral seated (weight-bearing) position using standard imaging protocols. The T1- and T2-weighted sagittal and axial images were reviewed by a chiropractic radiologist and collectively revealed discal dehydration and desiccation at the L4/5 level with underlying degenerative bulging of the disc. There was no disc herniation at this level. A left paracentral disc herniation (extrusion) was present at the L5/S1 level, which posterolaterally displaced the left S1 nerve root. An area of bright signal intensity within the disc herniation represents an annular tear. There was approximately 50% loss of disc height at the same level with a corresponding degenerative loss of signal intensity and evidence of discal desiccation (Fig. 3A and B). 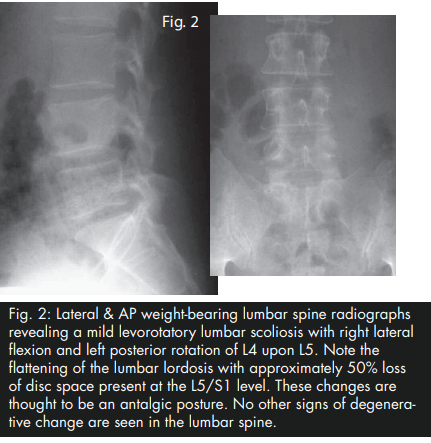 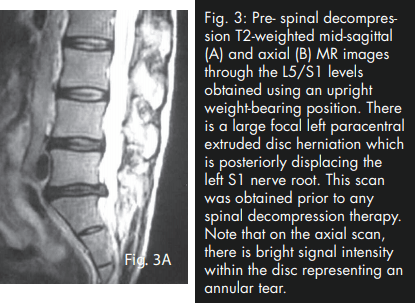 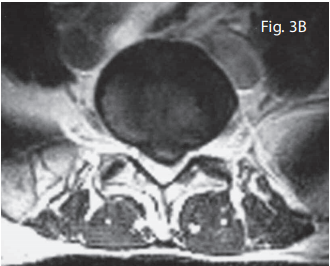 The patient considered an epidural injection in lieu of his previous two month failure of conservative and pharmaceutical trials. However, in an attempt to exhaust all noninvasive measures, a trial of spinal decompression therapy utilizing the DRX-9000 was sought. The orthopedic examination prior to decompression therapy was difficult due to the patients’ pain. Straight Leg Raising test, Fabre’s test, double leg raising, as well as Linder’s orthopedic maneuvers could not be performed due to pain. The limited orthopedic results confirmed lower back motion sensitivity with periodic shooting pains into the posterior aspect of the left leg. There was no abdominal pain, no noted change in bowel or bladder control and the neurological examination revealed no lower extremity paraesthesias.

Decompression was followed by 15 minutes of myofascial work and then 15 minutes of cryotherapy (cold packs) kept at a constant circulating temperature between 40 to 50 degrees Fahrenheit.

The patient’s job entailed much travel and only seven decompressions were provided at the examining doctors’ office; however, the patient continued treatment at various doctors within North America utilizing the DRX-9000 unit. These treatments were applied in five differing cities by five different doctors of chiropractic. Each differing doctor provided two sessions. Treatment protocols have been established by the distributor of the DRX-9000 (Axiom Worldwide) and we were advised these protocols were followed at the various locations, thus allowing consistent maintenance of this patient’s care.

The seven treatments occurring at the prescribing doctor’s office are outlined in Table 1. The force applied was based on the patient’s weight of 125 lbs. Relief of radicular symptoms began following the first treatment, and eight weeks of follow-up care provided 100% reduction of all lower back and leg complaints. Approximately 7.5 months following the initial date of treatment, MRI re-evaluation of the patient’s lumbar spine was obtained. These scans were performed at the same imaging center and using the same standard imaging protocols for a neutral seated (weightbearing) position. The images were read by a medical radiologist. The scans through the L5/S1 level demonstrated mild decreased signal intensity within the disc consistent with desiccation and degenerative change, as well as a complete resolution of the previous paracentral extruded disc herniation. There is no longer evidence of thecal sac deformation or displacement of the S1 nerve root (Fig. 4A and B). The patient denies lower back or sciatic pain recurrence since spinal decompressive treatments.

Conservative treatment of disc-mediated pain is traditionally accomplished by various techniques, including traditional manual traction, spinal manipulation, core stabilization and/or McKenzie exercises.1 All of these treatments have been studied and yield varying results, believed to be limited by the administration of care, patient compliance, degree of initial symptomatology, and the lack of utilized objective outcome measures. These modalities all act to theoretically decompress the disc, rehydrate the disc, and reduce pressure exerted on the pain producing aspect of the disc. Common medical approaches include pharmaceuticals and/or surgical intervention of various degrees including discectomy or removal of the implicative fragment only.

While various studies yield strong positive results utilizing traction for the treatment of lumbar disc herniation, 4,5 a number of articles in the literature suggest varied or no significant difference against a control.6-9 A proposed explanation for the widespread outcomes is from severe methodological flaws, the lack of clinical data which supports criteria for patient selection, as well as inter-operator variability in the mode of administering the treatment.10-13 Others believe the varying results may be accounted for by the paraspinal musculatures’ proprioceptive response to the linear pull delivered during manual traction.14 One study, which utilized a gravitational traction unit, analyzed the activity of these muscles via surface EMG and found relaxation of the paravertebral muscles early in the course of treatment, but this was soon followed by reactive contraction.15

The divergent results of the research towards manually applied traction were a catalyst for investigations which would yield consistent outcomes. Because of this came the introduction of motorized traction units. It is believed that with the aide of air bladders, as well as a motorized mechanism using harnesses and angle of pull adjustments, the flaws of manual traction could be overcome.14 Based on the premise that paravertebral muscle guarding is the differing factor between spinal decompression and spinal traction, Axiom Worldwide has adopted a technology to its spinal decompression units which can apply feedback mechanisms allowing the strength of pull to be adjusted in accordance to the patients’ proprioceptive response.

Motorized traction has shown to decrease intradiscal pressure by a factor that is proportionally inverse to the tension applied, and final pressures can reach below -100 mm Hg.16 In one study, utilizing motorized axial decompression, 71% of the subjects reported an 80% or more reduction in symptomatology.16 Two other studies showed a minimum of a 50% reduction in the all of the patients subjective lower back and leg symptoms. 17, 18 Objective correlations of these findings was confirmed in all of the participants in one group by improvement of dermatomal somatosensory evoked potentials (DSSEPs). 18 Quantitative results showing reduction in the size of discal herniation have been reported by way of CT scanning during motorized traction.4,19 In our case study, the affects of spinal decompression were objectively substantiated using pre- and post-treatment MR imaging.

A known indicator of functional disc impairment is the presence of herniation.3Biological failure of the disc occurs when structural disc alterations induce anomalous cellular responses.3 The use of weight-bearing positioning during MR imaging in this case is inferred to have placed our subject’s disc in a biomechanically functional position. Complete reduction of the visualized extruded herniation implies beneficial functional alterations to the intervertebral disc during spinal decompression.

Of an interesting note, a limited survey of practicing chiropractors revealed roughly 40% have experienced at least one job related injury, most in the upper extremity and occurring during the setup or manual manipulation of a patient.20 It is our supposition that the use of less physically demanding alternative methods of spinal treatment, such as spinal decompression, can yield high results while limiting the doctors potential for work related injuries.

Spinal decompression therapy provided an effective means of treatment for this patients symptoms resulting from discal herniation (extrusion) with associated impingement of the adjacent nerve root. As seen by this case, and supported by research, the apparent affects of spinal decompression therapy are quick to prevail, generally occurring within 10 treatments.21 It is inferred from this study the effects of spinal decompression via the DRX-9000 are multifactorial, affecting both the biomechanics as well as the pathophysiology of the disc. The immediate relief of symptoms in this patient suggests a reduction of inflammatory infiltrates affecting the nocioceptive fibers; while the decompressive forces to the disc allowed increased imbibition and complete reduction of the visualized extruded herniation.

MR imaging proved to be a useful and non-invasive technique in monitoring the efficacy of decompression therapy as it applies to this case. The standardized protocols employed by the operators of the utilized decompression units may have contributed to the favorable results seen. The lack of uniformity in treatment techniques has been suggested as an area of error for past clinical trials.11 Decompression of the spine proved to be superior to the other forms of conservative care when applied to our patient. The patients’ results were both subjectively favorable and objectively quantified.